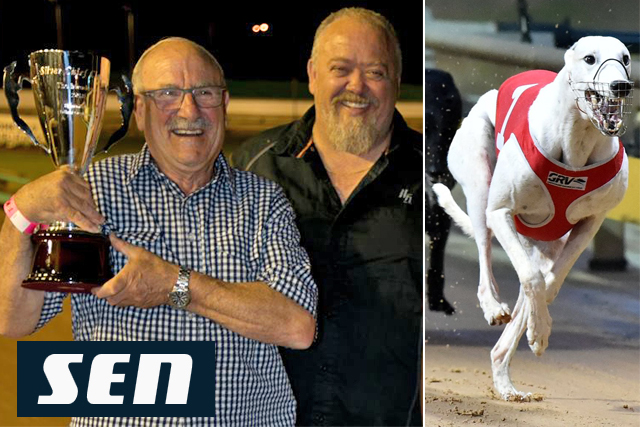 Hot young litter has next trophy in sight

A combination of regular handling virtually from day one through to an exposure to city life from 10 months of age are key parts to the breeding success of the Puleio family.

An emerging super litter could add a second group race to its CV when Poke The Bear lines up as the Traralgon Cup favourite on Friday night.

At just 25 months old, the Fernando Bale – Nicki Fields litter is taking Victorian tracks by storm, having already accumulated 50 wins and more than $280,000 in prize money.

Breeder Darren Puleio of Langwarrin, who works in partnership with father Michael, gave an insight into their success.

“We pretty much breed one litter per year and the advantage behind it is we can spend the time on them and do what we need to do to educate them properly,” Puleio told Melbourne radio station SEN.

“Before they are opening their eyes we get them used to being picked up and we touch their feet regularly. It makes it easier when it’s time to cut their nails later on.”

“They get a lot of handling. We’re lucky that my family is involved – my kids and my wife, and another girl that helps us out with the pups. I think having various people handle them over time is a good thing. We start when they are quite young. Even before they are opening their eyes we get them used to being picked up, we touch their feet regularly and just little things to try to get them used to being touched and handled. It makes it easier when it’s time to cut their nails later on.”

Puleio said exposing their pups to life experiences in the country and the city was a huge advantage.

“When they get to a certain age (about 10 months) we send them off to dad. He lives in Mulgrave so he’s in a built-up area. By then they’re all on leads, they’ve been kennelled a little bit at home, then we send them to dad and he gets them use to walking on roads (footpaths) and to cars and being in trailers. There’s a whole range of things he does with them that’s different to farm life. It makes them grow up to the next level. It gets them to a stage where they’re not afraid of anything. It works pretty well for us.”

Pictured: Michael and Darren Puleio with the Silver Chief trophy won by Out Of Range, and right, Poke The Bear wins his Traralgon Cup heat last Saturday night. Listen to every podcast right here.