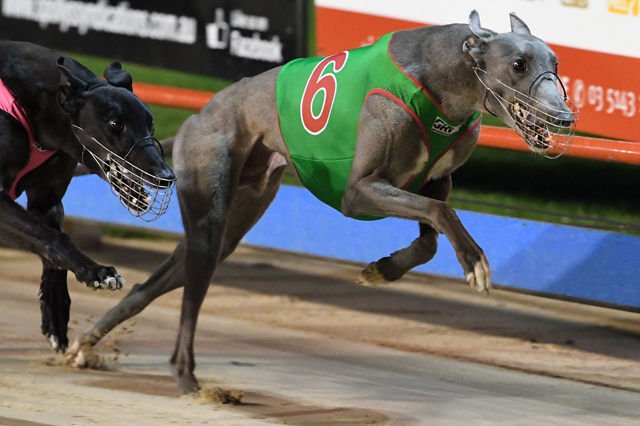 Mi Blue Day is unbeaten in three appearances for Alford, his last two victories being best of meeting efforts at Traralgon, and the Yarram trainer is upbeat about his chances of making it four straight when he steps up to elite company for the first time in his 26-start career.

While the son of Elite State was struggling for form, winning only one of his previous 16, Alford has masterminded a remarkable turnaround in his fortunes.
“Let’s be honest, he’s going better than I thought he would,” Alford said.

“I’ve only had him for two and a half months. I was training three dogs for his owners, which are a syndicate from Casino, and they asked me if I would try to get Mi Blue Day going. I told them to send him down and I’ll see what I can do.

“He’s definitely surprised me. I thought we could probably win some grade 5s around the bush but he’s really bloomed. It shows you that good dogs can drop from anywhere!

“He’s absolutely flying and I still think there’s improvement in him because he hasn’t had a lot of racing over the last six months. He’s only had three starts since August and before that he only had one run since June.”

Mi Blue Day earned a shot at the $47,000 to-the-winner Traralgon Cup with a runaway last start victory in a grade five final at the venue, clocking a fast 30.14sec, and he looms as the main danger to Group winner Shadale in the second of four heats.

“At his first start at Traralgon he ran 30.36sec and while he did get a little bit tired that was to be expected,” Alford said.

“Then his win in the final was awesome. He missed the kick about a length and a half too, so if he can come out as good as he did the week before I think he can get down to 30 seconds or under.

“He was brilliant in the final so I thought the next step for you is the Cup heats. You don’t get many chances to go in these races. That’s the chance we’re taking.

“I’m happy with box two. I just hope the three (Sparky Neveelk) gives him some room in the first five metres and he’ll be off. His acceleration is brilliant and he’ll run through a brick wall.

“It is a big step up and the five (Shadale) will be hard to beat but it’s going to take a good dog to knock him off if he does everything right!”