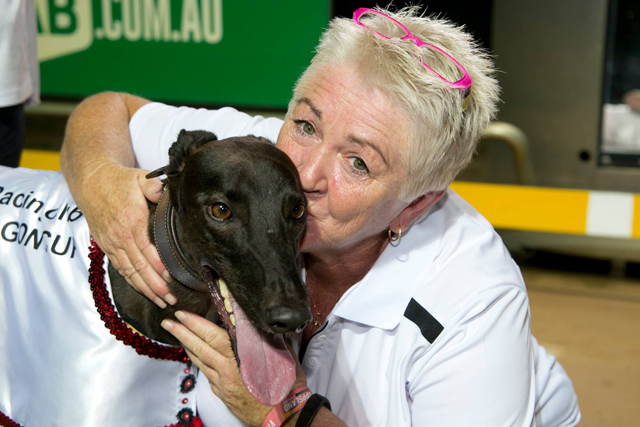 There is no doubt that dogs are a man’s best friend and this statement couldn’t be closer to the truth when talking about Traralgon trainer Terri Morris and her star greyhound Jesaulenko.

Not just famous because of his AFL name-sake Alex Jesaulenko, the four-legged athlete has made a name for himself on the track by dominating the Gippsland Carnival last year with a win at his home track of Traralgon as well as being crowned the Gippsland Sprint Champion.

At the ripe age of four, Jesaulenko has achieved some of the greatest heights in greyhound racing. In 2016 Jesaulenko was runner-up in the world’s richest greyhound race, the TAB $600,000 Melbourne Cup at Sandown Park. But it was his home track of Traralgon where he claimed his first group race; the Group Two $67,000 Traralgon Cup in front of a huge home-town crowd.

“I have watched the replay so many times – he has changed our lives completely,” owner, breeder and trainer Terri Morris said.

“Being a part of the Melbourne Cup was a crazy experience and to finish second in such a big event was great to be a part of. It completely changed our Christmas and was a great start to the New Year.”

Morris admits that nothing can beat a group win on your home track.

“The crowd and the response at the Traralgon Cup after Jesaulenko won was over-whelming,” Morris said.

“Jesaulenko just wants to please me all the time; he is my best friend.”

“He looks into my eyes and my heart melts, he just understands me.”

Although Jesaulenko missed out on a placing in the Gippsland Carnival Sprint at Sale on Boxing Day after recording a best-of-the-night time in the heats the previous week, he was awarded the Sale Greyhound of the Year for the second year running.

“He is still racing well despite being over 4 years old. Sale has kept him racing because it is a one turn track,” Morris said.

Still in terrific form, having won seven races from his past 12 starts, back-to-back Traralgon Cup’s is on his radar with the home-bred star drawing box seven in heat three on Saturday night.

The 2018 Traralgon Cup is the third leg of Greyhound Racing Victoria’s 2017/18 Gippsland Carnival which spans eight weeks across the four greyhound racing clubs in the Gippsland Region.

With more than $800,000 up for grabs throughout the carnival, the $47,000 first prize has been hard to pass up with some of Victoria’s fastest chasers taking the first step towards country cup glory in the four heats on Saturday night.

The Group 2 Traralgon Cup will be run on Friday 26 January and will be a great night out for the entire family.

The kids will have Turbo’s Trackside corner with inflatables and Gamehound and for the adults there will be live music, outdoor street vans and a Punters Club and best of all, entry is free.