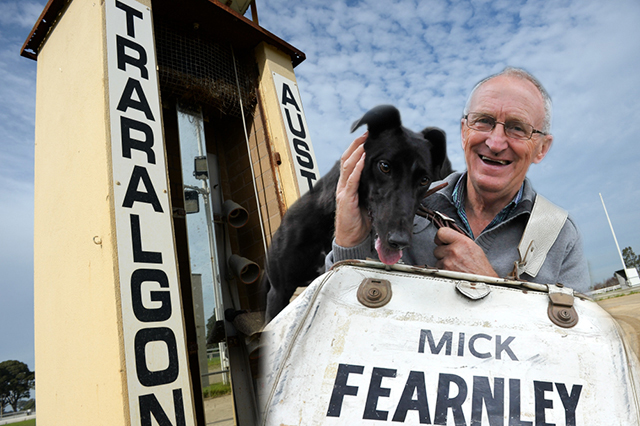 
As a former bookmaker Mick Fearnley knows all too well the odds are very much stacked against him celebrating his first Group victory in Saturday night’s Traralgon Cup.

There’s absolutely no doubt Fearnley would love to win the Group 2 feature, with his involvement with Traralgon – as trainer, lure driver, bookmaker and committeeman – dating back to the 1970s.

Fearnley does have numbers on his side with promising duo He’s So Good, a son of Fearnley’s 2012 Traralgon Cup finalist Audacious Elle, and Harlon both facing their first test in elite company in the $47,000 to-the-winner Cup.

However the Traralgon stalwart faces a major stumbling block in the shape of Andrea Dailly’s superstar Fernando Bale.

“Anything can happen in racing – and it does – but I really think the uncertainty of racing is the only thing I’ve got in my favour on Saturday!”

After He’s So Good and Harlon fought out the finish of the Warragul St. Leger – where the former was victorious – Fearnley threw the lightly-raced pair in at the deep end in last Saturday’s three Cup heats.

He’s So Good improved his record to eight from 18 when claiming a narrow 30.61sec victory in a roughly run second heat, marred by a career-ending injury to Australian Cup hero Luca Neveelk.

Harlon, the winner of five from 15, ran second to 30.18sec winner Emrys in the opening heat, while Fernando Bale stole the show in the final run-off, careering away in 29.97sec.

If either He’s So Good or Harlon – which are currently at $14 and $16 respectively in the TAB’s Fixed Odd market – can upset Fernando Bale, it will be a case of third time lucky for Fearnley who’s previously contested the Cup with Wy Yung Tiger in 2011 and Audacious Elle in 2012.

“I’m pretty sure this is the 15th Group final I’ve been in and two Group 1 runners-up is the closest I’ve got,” Fearnley said.

“Wy Yung Tiger ran second in the Winter Carnival Cup in Brisbane and By Starlight finished second in the National Futurity in Newcastle.

“It would be fantastic to win a Group race but taking the emotion out of it I don’t expect it to happen on Saturday. Logically the good dog (Fernando Bale) wins the race and the red dog (Emrys) runs second.

“It’s hard to say which of my two has the best chance. On ability I’d say He’s So Good and on the box draw it would be Harlon.

“A lot of people won’t believe me but from the club’s point of view I’m rapt to see Fernando Bale in the Cup and I’d love to see him win it. I said to my wife that if we woke up on Saturday morning and Fernando Bale was scratched I’d be disappointed because you want to see the best dogs win and you don’t want to be handed a Group race.”