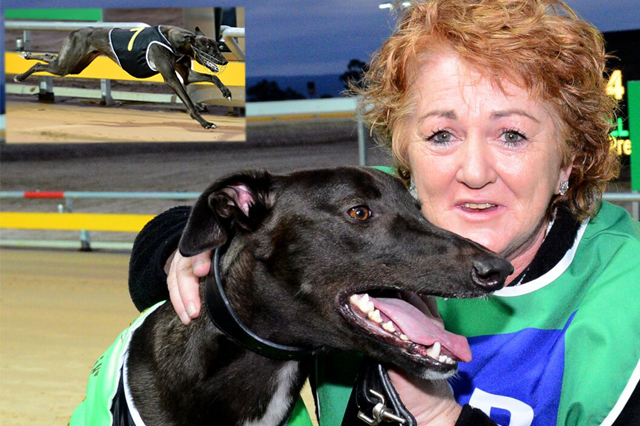 
Race 1 at Saturday’s opening night at Traralgon was put on for local trainers and they don’t get any more local than Terri-Maree Morris, pictured with winner, Jesaulenko.

“We live in a lovely spot in Traralgon just two minutes from the track, and it was so nice that we local trainers have been thought of. To win the first race at this track with Jesaulenko is a great feeling because we’re now part of the history,” she said.

Named after legendary Carlton footballer Alex ‘Jezza’ Jesaulenko, the highly promising black greyhound cruised to a comfortable six length win in heat one of the New Track Challenge, and his time of 30.50sec which was just 0.01sec outside the best time of the night over the 525m trip.

Terri-Maree said the vibe surrounding the new track – which has undergone a $6.2Mil redevelopment – was extremely positive.

“We’ve been waiting a long time (15 months) for the track to reopen, and it has been worth the wait. I’ve heard nothing but positive comments about it and I think Traralgon is on its way to being widely regarded as the best track in Victoria,” she said.

Terri-Maree said the track lent itself well to clean racing for a number of reasons.

“The track is extremely well lit up, which can’t be underestimated because vision is so important. And greyhounds just seem to have more room and more time to sort themselves out running into the bends, particularly over the 525m distance.”

“There was a big crowd here for the picnic meeting last week and a big crowd on opening night, so people are showing their support for the club and that’s a really good thing,” she said.

Jesaulenko will now contest this Saturday’s New Track Challenge Final, while Traralgon can look forward to racing on Saturdays and Mondays in the twilight timeslot going forward.
.


Watch: The first race on the brand new track at Traralgon.


.
Related: Out with the Old and in with the New