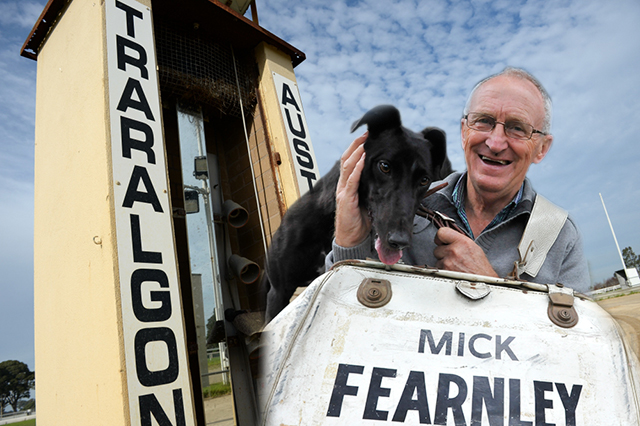 
Mick Fearnley is hoping to write the next chapter in his long and proud involvement with Traralgon at Saturday evening’s much-anticipated re-opening.

Traralgon has been out of action since May last year as the venue has undergone a $6 million facelift, featuring a new five-distance track (315m, 395m, 525m, 595m and 665m) and grandstand.

The curtain will come up on the revamped venue with a 12-race meeting on Saturday and Mick Fearnley, whose association with the Gippsland venue dates back to the 1980s in various guises as lure driver, bookmaker and currently as a committeeman, says it’s fitting the opening race – a heat of the New Track Challenge – will be won by a local.

“I’m really looking forward to Saturday night. I’m lucky enough to have four runners at the meeting and I’d love to win a race on opening night,” Fearnley said. “If I could win two or three that would be a real bonus!

“I think it’s a great idea the first race will be won by a local dog and if it happens to me that would be brilliant. But if it’s not me it’s still going to be another local.”

Fearnley liked what he saw at last Saturday’s picnic meeting – albeit in half-field events – and he believes the track will offer a point of difference on the Victorian provincial circuit.

“The thing I really like about the track is that it’s different. A lot of our tracks in Victoria are very similar so I think it’ll be good for the dogs to have a bit of variety. It’s a two-turn track roughly based on Richmond, so it’s also going to be different from Sandown and The Meadows” - MICK FEARNLEY

“It was a bit unfortunate the weather was wet for the first week of trials. It was still pretty wet for the picnic meeting last Saturday but everything went well and the weather looks like being favourable for opening night.”

Fearnley’s runners on Saturday’s card are Sweet About Lola (race 1), Kid Audacious (race 3), Harlon (race 7) and Audacious Sprite (race 11) but while he’d love to create history in race one he feels his best chances come later in the meeting.

“The first race is really competitive and I’d say Kid Audacious is my best chance,” Fearnley said. “He’s won his last two and he’s drawn the red in a 395m race. Harlon will also be hard to beat in another heat for the locals. It’s his first 500 for a while so he’s a bit underdone but if he happens to make the final he’ll improve with Saturday’s run. My last runner for the night is Audacious Sprite. He’s no star but he’s a brilliant box dog and he’s also won his last two so he’s a chance.”

Fearnley also has an eye on next month’s Group 2 Traralgon Cup heats, to be run on Saturday, September 12.

“He’s So Good is another dog that could run in the Cup heats but they’re only young and whether they’re good enough to be competitive I’m not sure.”
.
Related:
Out with the Old
Traralgon Formguide
.